Hospitals and health centres were the first to allow pets in the workplace. Early to grasp the benefits, Mars, the multinational corporation, had already introduced the concept more than twenty years ago. Now, smaller companies such as Ghent-based Com&Co are also jumping on the bandwagon. How’s that going for them?

What initially drives business owners to bring their pets to the office is rarely the (positive) effect these may have on work. Most animal lovers simply struggle to leave their loyal companions home alone. In addition, the company of their pet puts them in a positive mood.

That’s what Ilse De Smedt, Chief of the Ghent content agency Com&Co, also noticed when she visited a customer where two dogs were present on the premises. Since then, every Monday morning, she has been coming into the office with her four-legged friend. “On Monday, I spend a whole day dealing with the least fun things of the business: finance and administration. If Mello is at my feet, I am less annoyed.” 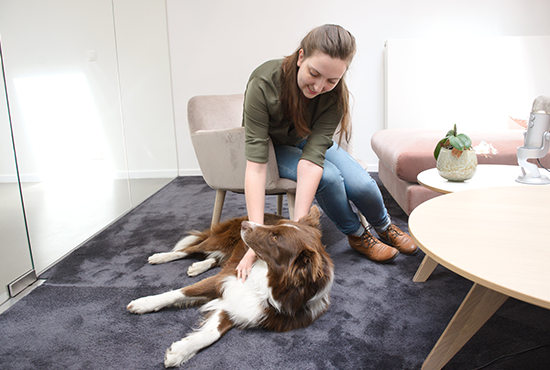 At home at work

After their morning walk, Ilse and her collie are received by more than twenty pairs of open arms: “Everyone is delighted to see us arrive in the morning. Mello brings some joy into our day.” Research has also shown that pets have a positive effect on the working environment. They provide a pleasant distraction and their contagious exuberance stimulates a warm working atmosphere.

“So far, we’ve only had enthusiastic reactions from customers and new employees when Mello settles next to them. Apparently, he creates an instant feeling of home. This can certainly work as an icebreaker,” says Ilse.

In addition, pets can significantly reduce stress at work. Since stress is often the cause of prolonged absenteeism, pets can even reduce absenteeism in the long term. Sofie Van Poucke, content creator at Com&Co: “Having an office dog here is really relaxing. For a moment, you forget that you have a very busy day ahead. With Mello around, Mondays are just furry friendly!” Ilse: “I honestly can’t claim that it really reduces absenteeism. To achieve such an effect, I think Mello should visit us more than one day a week.” 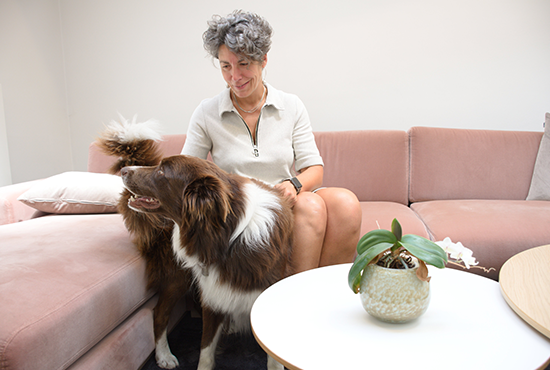 Clear rules to include everyone

Plenty of positive feedback by all accounts, yet we also have to face the facts. Office dogs may have their ‘favourites’ among the employees or – like Mello – they might growl at window cleaners and couriers. Muddy paws, loud barking and allergic reactions are also among the possibilities.

Finally, keeping a pet in the office also requires sufficient attention. Ilse: “Mello needs to pop out often, and I too as a result. It’s not always convenient. That’s why I only bring him one day a week. For the time being, Mello only has fans among our colleagues and customers. But if I ever find out that someone is scared or allergic or that the work is suffering, Mello will stay home again on Mondays.”

Many factors will determine whether having a pet in the workplace is a good idea. If you are open to the idea yourself, you should first run it by your employees. If you get everyone’s approval, make sure you dot the i’s and cross the t’s and include clear guidelines in a policy, and you will avoid arguments afterwards.

You can also read:

Subscribe to our newsletter to receive useful tips and information